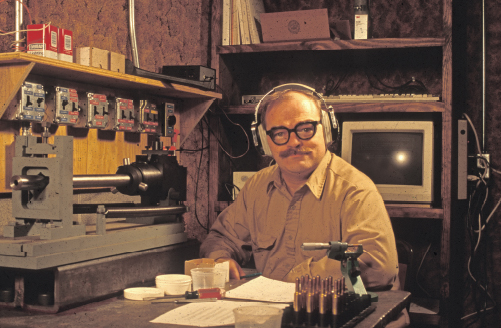 Col. Alphin entered the U.S. Military Academy at West Point in 1966. He graduated from USMA in 1970 with a commission as 2nd Lieutenant of Armor and a Bachelor of Science degree in Weapons Systems Engineering. In addition to taking the requisite Ordnance and Engineering courses, Col. Alphin also had the opportunity to study under the highly respected small arms expert, the late Mr. Gerald Stowe.

Upon graduation, Col. Alphin attended the Armor Officer Basic Course, from which he graduated as Distinguished Honor Graduate, and also graduated from the Airborne and Ranger Schools at Ft. Benning, Georgia.

Alphin served as Platoon Leader, and Executive Officer in C Company, 1st Battalion, 35th Armor in Erlangen Germany. He also served as the Assistant S-3 of the 2nd Brigade, 1st Armored Division, where his expertise in weaponry was widely recognized. Despite his relatively junior rank (1st Lieutenant), he was given the responsibility for the planning and execution of the 1st Armored Division’s Gunnery Training Cycle at Grafenwoehr Training Center, Germany.

Transferred to the 2nd Armored Division at Ft. Hood, Texas, in 1974, Alphin served as Company Commander, B Company, 2nd Battalion, 66th Armor, and as Operations Officer, 2nd Battalion, 66th Armor. His expertise in weaponry and fieldcraft was again widely recognized and he was selected as the Aide-de-Camp for the Commander, 2nd Armored Division (MG George S. Patton III). He also commanded the 502nd Military Police Company.

Alphin attended the Armor Officer Advanced Course at Ft. Knox, Kentucky in 1977-1978, from which he was the Honor Graduate. This was followed by two years of study at Rice University in Houston, Texas under Dr. Ira T. Gruber. Alphin graduated with a Master of Arts Degree in Military History in 1980. His primary areas of study were military technology and the War in Rhodesia.

Alphin was selected early for attendance at the Command & General Staff College (C&GSC) in Ft. Leavenworth, Kansas, graduating in 1981 on the Dean’s List.

During the period 1981 through 1984, Alphin taught in the Military History Department at West Point. During his last year of teaching, he created a course on the History of Military Technology which combined both ordnance engineering and historical disciplines. In the following year, Alphin was retained for a one-year sabbatical at West Point so that he could create a series of instructional TV tapes which institutionalized the knowledge and methodology used in his Military Technology course.

Upon departing West Point, Alphin assumed the directorship of the Materiel Testing Directorate at Jefferson Proving Ground, Indiana. He was responsible for the proof and surveillance testing of Army conventional ammunition and gun tubes. During this assignment, he pioneered improved automation and instrumentation of many testing methods. His designs and improvements resulted in a near octupling of the productive output of his directorate.

From Jefferson Proving Ground, Alphin went to Ft. Knox, Kentucky, where he served as the Chief of the Advanced Technology Research Directorate and then as Chief of the Armor Test Directorate of the Armor-Engineer Board. In these positions, he pioneered the methodology and systems for the testing of the effect of chemical protective gear on the fightingability of the soldier. He also conducted testing of many of the components on the current M-1A2 tank and other automotive and weapons systems.

Alphin then became Special Assistant to the Commandant of the Armor School. In this position, he did the research, conducted the testing, and prepared the definitive paper on U.S. Army doctrine, training, tactics, and equipment for the combination of tanks with foot mobile infantry. Col. Alphin’s 300-plus page dissertation was published by the Armor School and elements of it were incorporated into Armor School training and doctrinal texts.

Throughout his military career, Col. Alphin maintained his interest in sporting firearms and hunting. While a cadet at West Point, he shot on the Pistol Team, earning both his letter and All-American honors. Within one year after graduation his prowess on the pistol range earned him a Life Master rating in pistol. In the intervening years he has also shot in many other competitive disciplines wherein he has invariably earned the highest ratings.

While en route from Europe to Ft. Hood in 1974, Alphin took his first safari in Angola and Mozambique. Unfortunately (or fortunately, as the case may be), he was caught up in the guerrilla war and the takeover of Mozambique by Frelimo. He gained his first taste of African combat and African hunting and has been enamored of it ever since. The problems which he suffered with conventional, domestically produced sporting rifles and ammunition led directly to his experimentation and creation in 1975 of his first cartridge. From there he conducted approximately five years of private experiments in cartridge design, bullet design and terminal performance, and rifle design.

In 1979, Col. Alphin formed the A-Square Company for the marketing of his designs and ideas. The products gained a wide acceptance and orders were obtained from the Zimbabwe Department of National Parks and Botswana Game Industries by 1984. At its height, the A-Square Company employed 27 people and was the world leader in the field of rifles and ammunition for trophy hunting. Col. Alphin’s designs are widely recognized as superior. Cartridges which he has designed have been adopted by almost all of the major gunmakers, including Ruger, Winchester, and Browning. The A-Square Company was accepted in 1992 for membership in the Sporting Arms and Ammunition Manufacturers Institute (SAAMI, an NGO linked to ANSI [American National Standards Institute], the Departments of Interior and Defense, and the European Commissione Internationale Permanente – CIP). Col. Alphin held a seat on the Technical Committee and was awarded a seat on the Executive Board of SAAMI. In the 1990’s and early 2000’s, an arrangement was reached with Winchester-USRAC whereby the technology for his rifle designs (magazines and extractors) was transferred to them. It is no exaggeration to say that Col. Alphin set the pace in the civilian firearms and trophy hunting world.

In 1982, Col. Alphin was contacted for assistance with a civil suit involving an M-1918A2 Browning Automatic Rifle, (then used in U.S. Navy service), and the apparent culprit in the maiming of 4 sailors. After approval from USMA and DoD, Alphin entered the case. He successfully solved the problem and helped gain compensation for the sailors.

This success for justice, and the right thing to do, gave Alphin great professional satisfaction and he continued to accept cases on the random basis from then through year 2010.

In 2011, this all came to a screeching halt. Col. Alphin’s beloved, Elaine Marie Alphin, an award winning author of children’s books, suffered a hemorrhagic stroke which left her totally paralyzed, with what is called “locked in syndrome”. He gutted their house and turned it into Elaine’s field hospital. For some 3 years, his post of duty was at Elaine’s bedside, 168 hours per week, keeping the trach tube clear, feeding through the PEG line, and doing all else that need be done to keep her alive and on the road to recovery. Alas, the compounding pharmacy fouled up a formula and poisoned Elaine. After her passage (August, 2014), Alphin had his own health problems which resulted in a pacemaker and some one year of intensive treatments. Alphin is now back in condition for active duty and he embarks on a third career of Firearms, Ammunition and Ballistics Expert.