We have seen two recent incidents wherein large numbers of innocent, and unarmed, civilians were slaughtered (Las Vegas on 1 October, 2017 and Sutherland Springs, TX on 5 November, 2017). There are lessons to be re-learned.

One lesson is the absolute necessity to instantly, and violently, react. We saw endless video of the Las Vegas shooting. Police cams had the sound of gunfire but showed police giving commands such as “He’s shooting, get down’ “Get Back” and other such hogwash. In that situation, there is only one command that can be given, “Follow Me !!”. That situation was not a parking ticket or a speeding patrol. That situation was immediate life or death. Safety of the soldier or of the police is not important. It is the safety of the innocent civilians which is paramount.

In Las Vegas, 57 innocent civilians were needlessly killed, while another 520 plus were wounded. Yet, in Texas, an ordinary civilian instantly seized his rifle, exited his house and ran toward the sound of the shots. As a rule, mass murderers are cowards. When they see and hear reaction coming against them, they will get “Happy Feet”. They will lose the resolution to complete whatever they are doing, and they will flee.

When shot at, you immediately try to locate the source of the incoming fire. The police in Las Vegas should have been trained in Echo Location (another essay on that). And they should have had binoculars (a pair of 8×20’s folds up to shirt pocket size).

And they should have been trained in the use of their weapons. I saw photographs of police hiding behind their car, pointing a shotgun. Pitiful ! A shotgun, with buckshot, has an effective range of 50 yards, with slugs, 100 yards. They should have left shotguns in the car.

They should have had rifles. And the police sergeant yelling commands in the video should have been observing with binoculars, getting his men into position, and directing the fires of his men. And then been leading a pell mell run to the hotel. 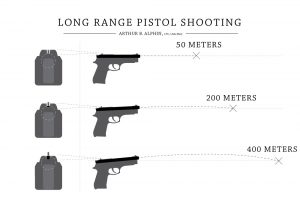 Are you going to reliably hit the shooter ? No. But if you can keep a magazine full (assume it to be 15 rounds) on one or two of the 4 foot by 8 foot window panes, the murderer is going to know he is being shot at. Using the Beaten Zone theory, you stand a high probability of getting a bullet in him. Get a bullet in him anywhere, the carnage stops and you will own him.

At Sutherland Springs, the hero citizen got a bullet in the shooter/murderer. The murderer threw down his rifle, ceased the carnage, and fled.

All Hail Stephen Willeford, the Hero from Sutherland Springs!!