Terminal ballistics concerns that which occurs from the instant the projectile touches the target until both the projectile and the target come to rest.  This includes both Kinetic Energy and Chemical Energy projectiles.  The inert projectiles used in small arms ammunition fall into the kinetic category.

Terminal ballistics skills are far different and more inclusive than what Medical Examiners provide.  The ME is more a toxicologist and is normally not qualified as a terminal ballistician.  For example, ME’s are taught that bullets travel in straight lines through mammalian targets.  In fact, they most certainly do not.  Proper examination of the tell-tale damage along the path of a penetrating projectile; along with knowledge of the precessional velocity and other instability issues for spin stabilized, kinetic energy, projectiles in free flight (which is a bullet from a small arm) is necessary.  If done properly, the terminal ballistician can show the actual path of the bullet, and the actual orientation of target and bullet in three dimensional space, at the instant of bullet impact.

Medical Examiners are taught to use the “Y” incision in an autopsy.  This is a valid procedure for toxicology and for determining the cause of death in a disease case.  For use in a shooting incident case, these techniques are not valid and actually destroy usable evidence.  As a terminal ballistician, LTC Alphin uses techniques specifically designed for a terminal ballistics post-mortem.  These techniques were derived from the Col. Benjamin Huger tests of 1854, The Thompson-LaGarde tests of 1921-22, the activities during the unpleasantness of 1946 to 1990, plus the definitive work done by Col. Dr. Martin L. Fackler and LTC Arthur B. Alphin in the modern era.

LTC Alphin used these skills and techniques to great effect in the Mays case, the Wilhelm case, the Tamme case (in alliance with a forensic anthropologist), and many other cases. 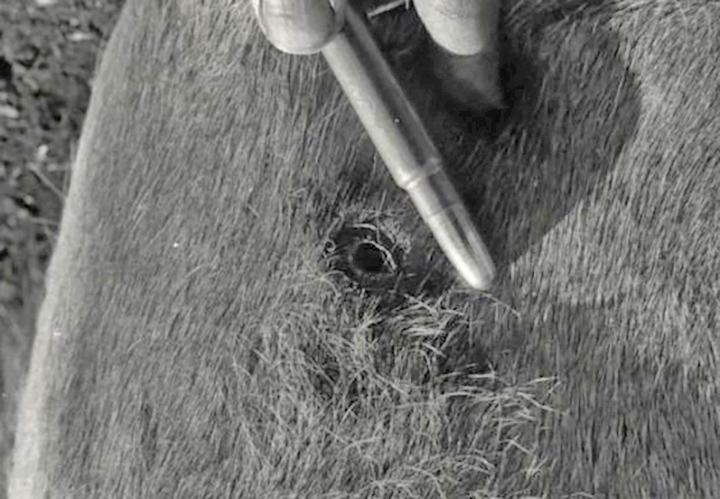 This is the entry wound on a wildebeeste caused by a soft point bullet fired from a .375 Weatherby Magnum. Note that the entry is mostly circular, indicating that the long axis of the bullet was nearly perpendicular to this part of the animal’s hide at the moment of impact. Also note that the skin stretched and some hair was burned off by the passage of the bullet. Lastly, note that there is zero blood or flesh coming back out through the entry. This is normal due to the stretching and shifting of the skin, of the subcutaneous fat layer and of the various layers of musculature. This bullet went through the rib cage and into the left lung. The animal bled heavily out the nose and mouth but still nothing in the entry wound.