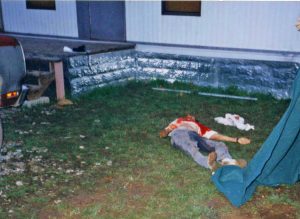 Photograph of Ray Hensen, deceased. It is believed that he assaulted Mr. Waller with the pipe visible above the body. Mr. Waller fired in self-defense. 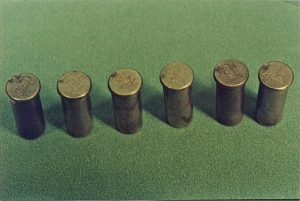 Photograph of the 6 cartridge cases recovered from Mr. Waller’s revolver. Note the double firing pin strike on the left most case. 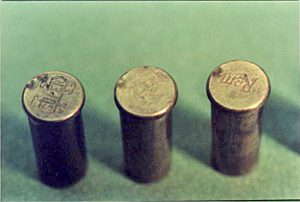 Photograph of the left 3 cases. The double firing pin strike supports Mr. Waller’s, and witnesses, testimony that a warning shot was fired and, after a pause, the revolver was fired until ammunition expended.

I was approached on this case by the Kentucky Department of Public Advocacy (DPA) who knew that they needed a gunfight dynamics expert and a terminal ballistics expert.  It is particularly noteworthy because the DPA was called in too late, and I came in later still.

On the late afternoon of 9 March, 1998, an argument had broken out between Mr. Waller and members of a Hensen family.  Mr. Waller tried to defuse the situation by going home.

He lived in a house trailer with his father and brother.

Members of the Hensen family, Ray C. Hensen and his cousin, Ricky Tackett, stewed on this for awhile and then went to the Waller trailer, armed with a pipe.  Alcohol was very, very heavily involved on the part of the Hensens.

Believing himself under attack, Mr. Waller seized a revolver kept in the home and fired a warning shot.  He then felt forced to shoot in defense of himself, killing Ray Hensen and wounding Tackett.  Two Kentucky State Troopers responded.  The troopers appointed themselves as crime scene investigators and very vigorously pursued the case.  They interviewed the rest of the Hensens (noting that they were all very drunk) and the Wallers (Burl had fled) and decided upon their own conclusions.  By 10 March ‘98, they had an arrest warrant for Burl Waller and had him in the jail by 11 March ‘98.  All this despite the fact that the Medical Examiner’s Report was not produced until 14 April, 1998.

The troopers very aggressively questioned Burl Waller in jail.  Mr. Waller, being an 8th grade drop out, allegedly consented to not having a lawyer present.  The questioning continued without any audio or video recordings.  The troopers thought they had seen a bullet wound in Hensen’s back.  They leaped to the conclusion that this bullet wound was evidence of a deliberate and cowardly murder.  They believed they had a confession from Waller to this effect and turned their materials over to the DA.

The DA had Waller in court a few days later (still no ME Report) and the Court accepted the confession and Mr. Waller allegedly waived all rights.  Only at this point did Waller understand that he could get a lawyer and the DPA was notified.

Mr. B. Scott West was assigned to the case by the DPA, and he had an uphill fight.  With the damage already done, his  efforts were split between a request for trial, an appeal, and mitigation for sentencing.  This dragged on and on, with Waller still in the county jail.  I was notified in March of 1999, a year after the shooting incident.  I immediately responded, traveled to Hazard, KY, and found some interesting things.

Waller had fired six shots from his revolver.  The revolver, with the expended cartridge cases still in the chambers, had been recovered by the troopers.  I went to the evidence room and inspected the items.  What stunned me was that no one, up until my inspection, had noticed that one of the cartridge cases had a second firing pin impression.  This is classic in a desperate gun fight of self defense.  The average untrained fellow, when he gets the adrenaline rush as he realizes he is about to die, fires until he runs out of ammunition.  A semi-automatic pistol locks the slide back after the last shot.  But with a revolver, the assault victim keeps pulling the trigger until the hammer falls on the first cartridge, which is inert because it has already been fired.  This discovery clearly tended to support Waller’s original claim that he fired in self defense.

The report of the ME was a typical ME report.  It was not a terminal ballistician’s post-mortem.  The alleged shot in the back of Hensen was very high on the right shoulder, just behind the proximal end of the humerus.  There was nothing in the report about debridement around the wound, angle of obliquity, or anything else that a terminal ballistician would have looked at in trying to figure out exactly what happened.  Further, if this wound had been an entry from a bullet fired at Hensen as he was going away, there should have been damage in the shoulder.  However, there was no such thing mentioned in the ME report.

Looking at the way a baseball player’s body twists as he takes a swing, Hensen might very well have just swung the pipe and missed, just as the shot was fired.  It is more than feasible that Mr. Waller could have been in the process of pulling the trigger, and, simultaneously, dodging the pipe.  This would result in an entry in Hensen’s shoulder or high back.  The debridement markings around the edges of the entry wound would have been decisive.  But the ME did not put any of this in his report.  One can also question whether the “confession” and court proceedings led the ME to “half-step” his report.

My examination of the recovered bullets was inconclusive.  They had marks which indicated that they were unstable in Hensen’s body, ie. they began to tumble and traveled zig-zag.  The autopsy report supported that suspicion because both lungs had been perforated (over two liters of coagulated blood had been recovered from the thoracic cavity) yet the alleged entry wounds were not in any way aligned with the lung damage.  In fact, the location of the recovered bullets was not even recorded in the report, and there were no photographs of the autopsy.

I believed that the physical evidence was consistent with, and only with, Burl Waller being the victim of an attack and that he fired in order to save his own life.  I prepared a report and Mr. West fought hard for his client.  But, in reality, there was little any attorney, not even William Jennings Bryan, could do.  In June, 1999, Burl Waller was swept away into the gulag.

My only comment on this case is; I am not a musician but I can recognize Chattanooga Choo Choo when I hear it.

Scott West is now the General Counsel for the Office of the Public Advocate in Frankfort, Kentucky. He recently was a key player in the May, 2016, 44th Annual Public Defender Education Conference. His specific presentation concerned the ethical requirement for Judges to be a factor in protecting the rights of the defendant.