This case involved the death of Trent DiGiuro, an Offensive Line starter on the University of Kentucky (in Lexington, KY) football team.  While sitting on the porch of his athletic frat house on the evening of 17 July, 1994, a bullet gained entry on the left side of his head.  The bullet did not exit but basically destroyed his brain.  The expected arterial blood spurts, from his skull, did follow; soaking the chair and running across the porch.  This gruesome blood flow (normal after a brain shot), caused incredible emotional and mental trauma on the part of witnesses and, later, the entire University and city. 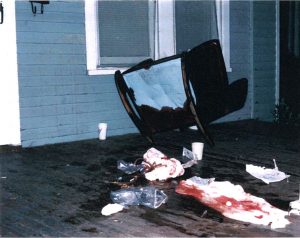 This photograph shows the overturned chair and porch where Trent DiGiuro received his fatal head wound.  Note the copious blood flow and the large quantity of paper towels used in a near futile attempt to clean up the post-impact arterial blood flow.  This caused stress within the community and intense prejudice against the accused.
[A photograph of Mr. DiGiuro is not included, in order to preserve his dignity.  However, his body did not exhibit the damage; bullet exit, bruised eyelids, bulging eyeballs; which one would expect from the impact of a 100 grain bullet at a translational velocity of some 2,800 plus feet per second and having some 1,700 foot pounds of kinetic energy.)

Some 6 years later, based on a tip from a dis-gruntled exgirlfriend, police raided a home, seized a rifle, and arrested one Shane Layton Ragland; charging him with the murder of Trent DiGiuro.  The city of Lexington, KY, was literally aflame; somebody was finally going to pay for the murder of their football player.

The defense attorney, Mr. J. Guthrie True; of Johnson, Judy, True and Guarinieri; (in Frankfort, KY) was excellent but he had an uphill battle.  Motions for change of venue were repeatedly denied, despite the very public witch hunt; and the incendiary and prejudiced news coverage; in Lexington.  The evidence was all circumstantial, but Mr. True excelled in discovery.

At that point, I came on the case.  In working with Mr. True, we uncovered glaring issues.  The match in so-called ballistic fingerprinting of the death bullet, against 6 test fired bullets, from the alleged death rifle, was only a partial match of a single groove, out of all six test bullets fired.   Their lab “expert” said that the match could not be duplicated, nor even recorded on film, but he “knew it” when he “saw it”.   He said that it was the 12 o’clock groove.  But ammunition is round and the bullet from the rifle in .243 Winchester caliber is spinning at roughly 3,400 revolutions per second.  And after it decelerates to a halt, how can you tell what is 12 o’clock ??

The prosecution claimed that only 1,418 rifles in existence   could have fired the death bullet.  This claim was a deliberate falsehood.   They got this number by the BATF querying the Weatherby company about how many rifles of this Model of Vanguard in .243 Winchester were sold in the USA.   However, the truth is that there were 8 different Models of the Vanguard, in .243 Winchester, sold in the USA over a period of some 14 years.  This totaled well over 20,000 rifles.

Part of the basis for their falsehood is that the death bullet came from a rifle with 4 groove rifling, yet the normal US rifle  for the .243 Winchester has 6 groove rifling.  The huge difference is that US rifles were SAAMI (Sporting Arms and Ammunition Manufacturer’s Institute) standardized when the .243 Winchester cartridge appeared in 1953.  But the CIP (Commissione Internationale Permanente) in Europe, and the rest of the world, standardized this bullet diameter as 4 groove when the .244 Holland & Holland Magnum was created in the 1910’s.  And CIP stayed at 4 groove until 1998 when it was realigned to the US standard (I was on that committee).  But there was a proviso that 4 groove was still acceptable until all existing barrels, and all existing tooling, were consumed.

My best guesstimate was that, in fact, more than 70,000 rifles were in the USA with 4 groove rifling of the appropriate diameter.  On a by county distribution, this means there were 21 rifles, in each county in the USA, with 4 groove rifling in that caliber.  Of course, all of this was excluded by the Judge. He even restricted Mr. True so that the defense could not mention any of these impeaching facts in cross of the prosecution’s case in chief. 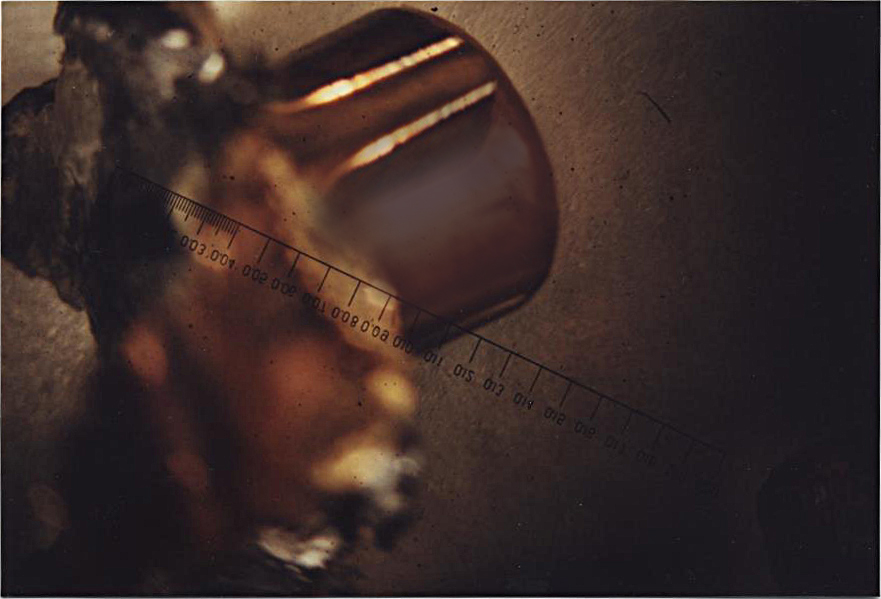 This photograph is of a recovered bullet in this case. Note that the expansion deformation makes mounting of the sample in a microscope extremely problematic. Also, the deformation negates the possibility of using a high enough magnification (with its extremely short focal length, requiring the lens to be closed than four hundredths of an inch) to detect individual striations on the bullet of less than .001 inches, smaller than one/fifth the thickness of the paper on which this is printed.

The prosecution investigation was amateur at best.  It took a Court Order for Mr. True to gain “permission” for me to visit the prosecution laboratory.  I found that their lab expert had no applicable degree nor any formal training.  His microscope was originally for cattle sample typing (read bull semen), and he could not make a photographic record.  But he was more than ready to say that the death bullet matched the test bullets fired from the alleged death rifle.

Late in the evening before I was to testify before the Jury, I was thoroughly examined by the Judge.   He was a UK football booster but did not recuse himself.  He was clearly very angry at me personally.  The Judge severely limited what I could say.  All of my photographic and visual aids, save for a cartridge board, were excluded.  My testimony was specifically limited to the “My opinion is…” variety.  I was not allowed to present any scholarly back up, nor any explanation, nor any other exculpatory facts; not even testimony of what the cartridge board showed. 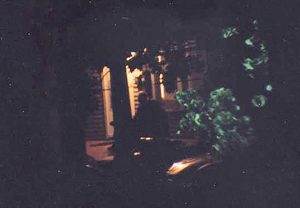 This photograph is a time lapse through a duplicate telescopic sight as the defendant’s. It was taken on a night with duplicate moon data, duplicate cloud cover and duplicate other factors. One can barely see the reticule (crosshairs) nor the fellow in the chair. Of course, one problem is that the “fellow” in the chair is actually an oversized stuffed Teddy Bear who the Judge did not allow to testify at trial. Theodore was not amused at his being muzzled.

The defendant was convicted and sentenced to 30 years.  Appeals were started and a new trial was ordered.  Prodefendant feeling gained momentum when a national investigative TV show took interest in the paucity of solid circumstantial evidence.  I spent two days in Frankfort, KY; going over everything with the producer, helping him see the case thorough my eyes.  I also did a few segments elaborating upon the technical defense evidence.

The prosecution did not want to risk a second trial (which would probably have had a change of venue) and defendant Ragland pled to lesser charges and time already served (year 2007).

The legacy of this case is very important for two reasons; beyond the obvious that you need a good, tenacious, defense attorney like J. Guthrie True.

First, prosecutors will stop at nothing to gain a conviction.   The defense must refuse to take “evidence” for granted or at face value.  The defense must demand the CV of all “experts” and police testifying for the prosecution; must demand the original lab notes, lab requests, photographs, lists of equipment used, and so forth; and must refuse to accept a prosecution conclusion without a vigorous examination of their “facts” and methodology.  In two words, Stipulate Nothing.

Second, the FBI came in (comments elsewhere on Title 5, CFR, and the great beltway money machine) and testified about matches in their “Comparative Bullet Lead Alloy Analysis Test”.

Mr. True and myself, with the help of a chemist, were able to savage the FBI so severely in a hearing that their lab tech pled guilty to misdemeanor perjury (and got 4 months). Since then, the National Academy of Science rendered a tepid opinion of CBLAAT and the FBI formally abandoned this “test” and all such testimony, and support of local law enforcement, as “junk” science. 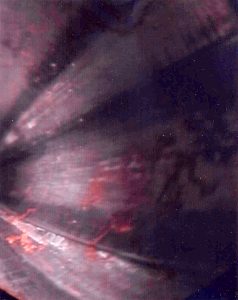 This photograph was taken with a borescope (read colonoscope for rifles) inside the alleged death rifle barrel. Note the large quantities of bullet jacket fouling left within the bore, one of many facts which tends to negate the “science” of “ballistic fingerprinting”.

Mr. Ragland had been assaulted while in prison with a lifting dumbbell.  It fractured his skull.  His vision is bad, he is deaf in one ear, and has trouble walking, but he is free.

Mr. True is now Senior Partner of True, Guarnieri and Ayers in Frankfort.

Mr. Ragland’s father has yet to pay my invoice.